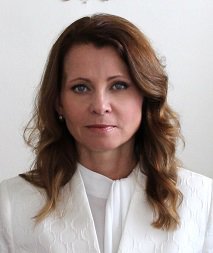 In 1992 acquired Master degree in Chemical Engineering from the Odessa Polytechnic Institute.

In 1998 acquired Master degree in Accounting from SWU Neofit Rilski.

In the period 1998 - 1999 worked as manager organizing events in the private sector.

From 1999 to 2015 was manager of a private company for PR and advertising.

In the same period was Chairperson of the Board of Directors of NGO Association of European Iinitiatives in Bulgaria, where was engaged with projects in the field of healthy lifestyle, limiting tobacco and alcohol and drugs.

From 2015 was chief expert in Department Drugs and Advice of Drug Policy Directorate at the Ministry of Health.

In May the same year was appointed Secretary of the National Drug Council at the Council of Ministers.

On 15 May 2017 by order of Prime Minister Boyko Borisov was appointed Deputy Minister of Health.